Established in 1899, the 60 acre location on Santa Monica Blvd was originally named the Hollywood Memorial Park Cemetery. By the latter part of the 20th century it had become run down, and allegations of financial mismanagement caused the state of California to forbid the ongoing sale of plots. In 1998 on the verge of closure in a bankruptcy proceeding, Forever Enterprises purchased the then 62 acre property, renamed it Hollywood Forever and restored it. 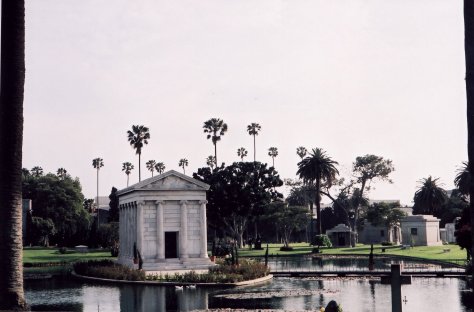 The property which contains several marble mausoleums and sunken gardens is right out of central casting with the Hollywood sign on the nearby hills. There is no wall on the southern perimeter and the graves back up to the workshops and sound stages of Paramount Studios. 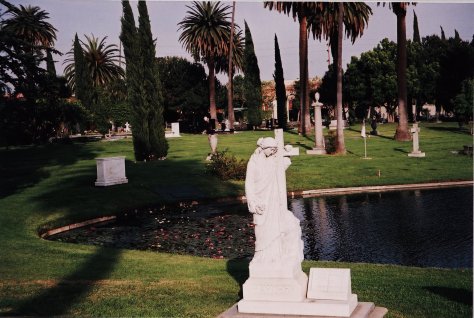 From the entrance of the grand wrought iron gates to the manicured grounds of crypts and ponds, the cemetery is very elegant. Numerous celebrities are buried here including old movie stars such as Rudolph Valentino, Mel Blanc, Cecil B. Demille, and Mickey Rooney.

Seems unusual that there are no elaborate musings or quotations of literary genius on the tombstones and crypts of Holly wood’s most famous.

Each year at the cemetery a festival is held known as the Dia de Los Muertos festival. This Mexican tradition is a joyful celebration of life, family and departed loved ones.

The reflecting pool in front of Douglas Fairbanks tomb, where the silent-screen swashbuckler’s profile appears in bronze bas-relief. Fairbanks’ gravestone is engraved with the “Goodnight, sweet prince” soliloquy from “Hamlet”.. 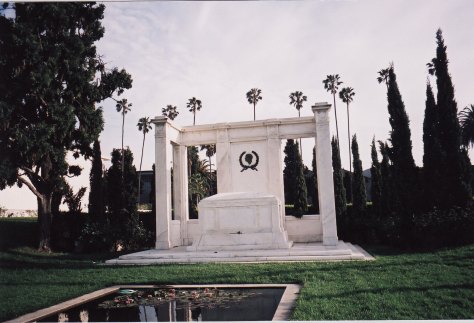 Johnny Ramone of the punk rock group, The Ramones, and the third member to pass away was memorialized with a bronze statue. The 50 year old Johnny (aka John Cummings) joined dead Ramones, Joey and Dee Dee, on September 15, 2004 after succumbing to prostate cancer. The $100,000 statue depicts the beloved NYC mophead with his Mosrite guitar in hand. It was sculpted by artist Wayne Toth. 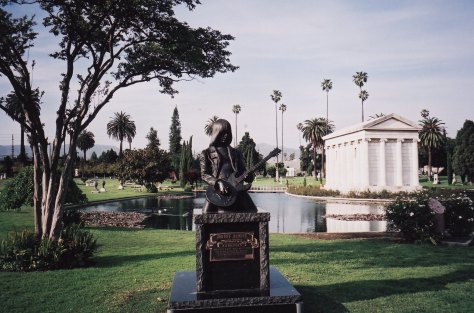 Walking tours lasting 2 hours are available for a charge. Reservations are not required.