The town of Moffat in Dumfriesshire, Scotland, hosts an old cemetery at the south end of the High Street with gravestones almost solely created from local red sandstone extracted from the River Annan basin. 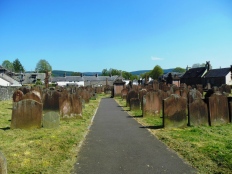 John Graham, of Claverhouse, was sent to Scotland with orders to enforce conformity to the Established Church. In 1685, Claverhouse stood in the churchyard and ordered the people of Moffat to take the Test Oath (swearing loyalty to the English king.) Anyone refusing was labelled a “Covenanter” and was likely to be persecuted, tortured and banished. It was through his relentless repression of the Covenanters that Claverhouse earned the name “Bluidy Clavers.”

In 1747 the original graveyard was covered over with four feet of soil to accommodate future burials. It contains several famed occupants including:

The headstone above is engraved with flowers, a rose represents love and purity and the brevity of life on earth. Life, like a blooming flower, is never meant to be permanent.

In Memory Of / Mr. / Samuel Billing / Who Died Suddenly / By Falling From A / Bridge Into The / River On The 21st Of / Decr. 1785 / In The 80 / Year Of His Age. / Ye Living Men / Come View The Ground / Where You / Will Someday Lie
The effigy with wings represents the soul in flight. The crown represents the glory of life after death.

Near This Spot / Is / Interred The Remains / Of / John Pagan / Late Cattle Salesman / Liverpool / And Tenant Of Breconside / In This Parish: / Who Died At Inverness / 16th July 1851 / Aged 60 Years / This Monument / Is Erected / By His Numerous Friends / In Testimony / Of Their High Respect / For His Public / And Private Character.
The rose represents love and purity and the brevity of life on earth. Life, like a blooming flower, is never meant to be permanent.

Sacred / To The Memory Of/ William Johnstone, Who Died / At Achtrictan Glenco, / 4th Novr / 1790, Aged 62 Years. / Also Thomas Johnstone His Son / Who Died 21st May 1793 Aged 16 Years / Also Helen Little, Spouse To The / Above William Johnstone, Who Died / The 3rd April 1813. Aged 70 Years / Also Margaret Johnstone Their / Daughter, Who Died 7th Sepr 1842. / Aged 62 Years/ And Jane Also Their Daughter/ Who Died The 24th June 1856, Aged 76
The grave is terminated with an urn, one of the most common of monuments representing the body as a vessel of the soul and its return to dust while the spirit of the departed eternally rests with God.

Just back from a visit to Scotland where there are a multitude of century old cemeteries just waiting to be photographed and documented.

The village of Temple in Midlothian, Scotland is named after the famous military order of the Knights Templar. The Order of the Temple was founded to protect pilgrims in the Holy Land against attack by the Saracens.

The ruins of the old parish church date from the early 14th century. The late Gothic tracery can still be seen with animals carved at both ends of the mouldings above the windows.

In the churchyard are many interesting headstones including the memorial to the farmer at Outerston, John Craig, who died in 1742. He is shown in his best clothing and with his children.
Here Lyes John Craig / Farmer In Outerston / Who Died April 23 1742 / Aged 68 Years ~ Also / His Son William / Craig Late Farmer In / Outerston illegible Who Died 1799

This gravestone contains symbols representing tools used in the trade of Masonry (the builder); a compass, a ruler, a hand brace and a hammer. 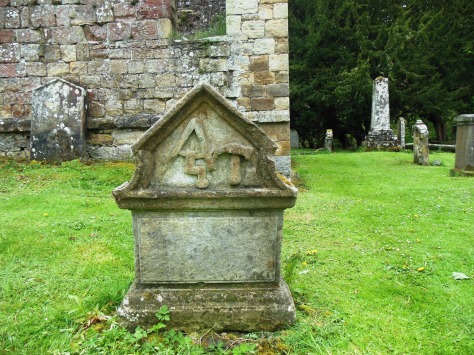 Another gravestone with Masonic tools; a compass, a square and three blocks, one of which has a nail at the top which may represent a hinge. 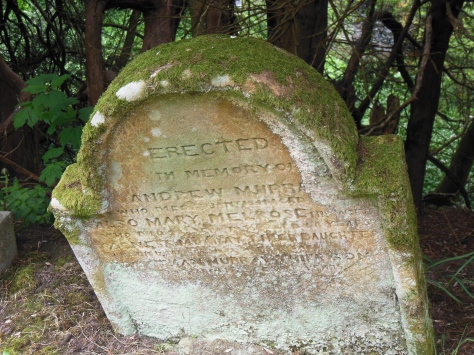 The Greek cross with four arms of equal length is pre-Christian, and in paganism, represented the four elements: earth, air, fire and water. It has been used for centuries in Christian art.

The image below is an engraving of a cross on a headstone located at Golden Gate National Cemetery in San Bruno, California.

When five Greek crosses are displayed together, they represent the five wounds inflicted on Christ during the crucifixion (nails in the hands and feet and a spear in his side).  This cross was popular in the Crusader era.

A circle superimposed on a Greek cross is representative of the crown of thorns placed on Christ’s head during the crucifixion.