A burial ground in London going back to Roman times grew to become the sprawling, Gothic, Highgate Cemetery. In the late 1960s, Satanic rituals and sightings of ghosts were reported. It was suggested that a vampire was buried there, and the Satanic rituals had revived it.

In the 1970s this myth was reinforced with reports of dead foxes found within the cemetery that had no obvious sign of death. A ghostly figure and sightings of a man with waxen features occurred near the Egyptian Avenue entrance at dusk.

A major clue to debunking the legend was provided by Spanish neurologist, Juan Gomez-Alonso, when he stated that the symptoms of vampirism bore a striking resemblance to rabies. Many of the famous vampire panics of the 17th-century coincided with rabies outbreaks. Sufferers are hypersensitive to light, water and strong odours such as garlic. The disease attacks the central nervous system often leading to the victim becoming demented, nocturnal, and even hypersexual –  all qualities which are associated with vampires.

The myth of the vampire began in 15th century Eastern Europe with Vlad Tepes, prince of a province in Romania. He was an unforgiving bloodthirsty ruler who routinely tortured people in the name of Christianity. His favourite method of punishment was impaling his enemies on giant wooden spears initiating the rumour that he drank their blood.

It is believed that after capture during a battle that he was ransomed to his daughter who lived in Italy. A tomb within a Naples church is engraved with symbols of a dragon, flanked by sphinxes which represent the city of Tepes. It is alleged to be Dracula’s tomb. (Vlad was the son of Dracul, meaning dragon or devil, and the name Dracula means the son of Dracul.)

The arrow is a recognized symbol of mortality. Arrows may also represent a military profession or hunting.

In the following instances, the arrow appears with a symbol of three linked rings (the chains that bind the Fraternity of the Independent Order of Odd Fellows) The letters FLT stand for Friendship, Love and Truth. 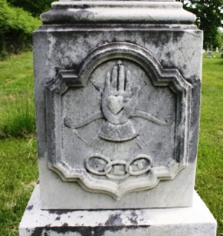 This first image displays the hand of God piercing the skull with an arrow.

The gravestone shown below is engraved on both sides. The front identifies the deceased members of the Boney Family. The back contains verses from the bible and an effigy with a downward pointing arrow.

As I Am So Shallt Thou Bee / Prepare Thy Self To Follow Mee / Blessed Are The Dead Wich Die In The / Lord That They Mae Rest From Their / Labers And Their Works Follow Them
This verse is closely related to Revelations 14 verse 13 which varies within different versions of the Bible.

Abel Sherman was killed and scalped by Indians near Dead Man’s Run while collecting ripe apples. Although he was buried where he died, his remains were later moved to the Pioneer cemetery known as Round Bottom Cemetery. 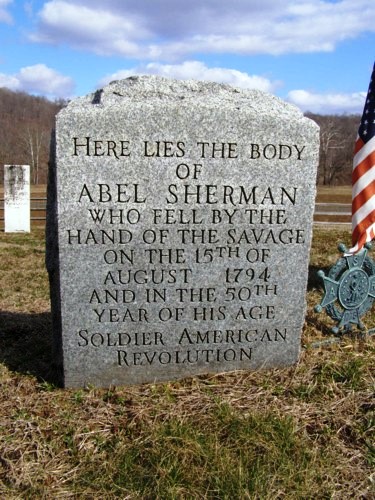 His original headstone which is on display in the Campus Martius Museum displays a soul effigy with the legend; Here lyes the body of Abel Sherman who fell by the hand of the savage on the 15th of August 1794, and in the 50th year of his age.

Boothill Graveyard in Arizona contains the final resting place of three men killed at the O.K. Corral gunfight, the most famous gunfight in old west history although it only lasted 30 seconds. A group of outlaws faced a number of lawmen at a distance of approximately 6 feet.

Boothill also contains the gravestone of John Heath, tried and sentenced to life in prison for his part in organizing the robbery and subsequent murder of four people in a general store in Bisbee, Arizona. Unsatisfied with the lenient sentence, a lynch mob forcibly removed him from jail and hanged him. His five accomplices awaiting execution were duly hanged. 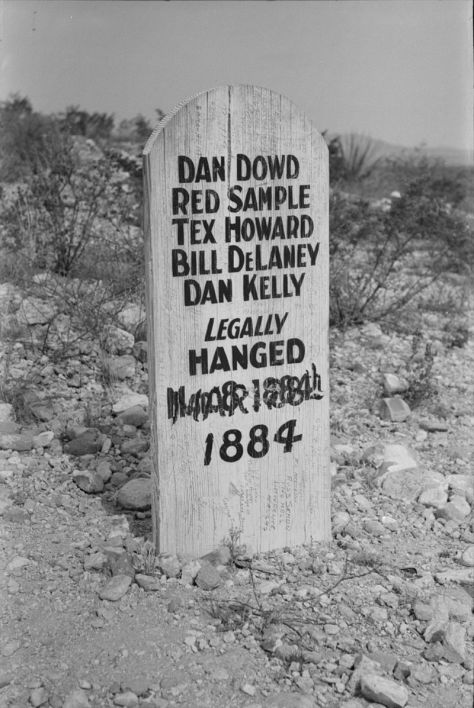 Rounding out this post with a little humour on the tombstone of Lester Moore who was a Wells Fargo Agent in Naco, Arizona. He was killed when a customer became irate over the condition of a package he had come to collect. Before he died, Moore managed to kill Hank Dunstan with a single bullet.

A hand or arm reaching down from Heaven with an ax is believed to be the hand of God severing the tree of life. It seems a rather vengeful image, and its initial use during early Colonial times is probably exactly what was intended. Puritans believed in an all-powerful and vengeful God smiting man out of the world.

During the following centuries, God was believed to be more benevolent, and therefore the image was interpreted as Death cutting down the tree. The life of a tree as it survives the seasons reflects a person’s life of birth, adulthood, old age and death.

Stop traveller and weep,
For here beneath death’s shade,
Snatched from his friends,
A lovely youth is laid.
But sleep in hope,
For soon hell burst this sod,
And rise in air
To meet his Saviour God.   1802 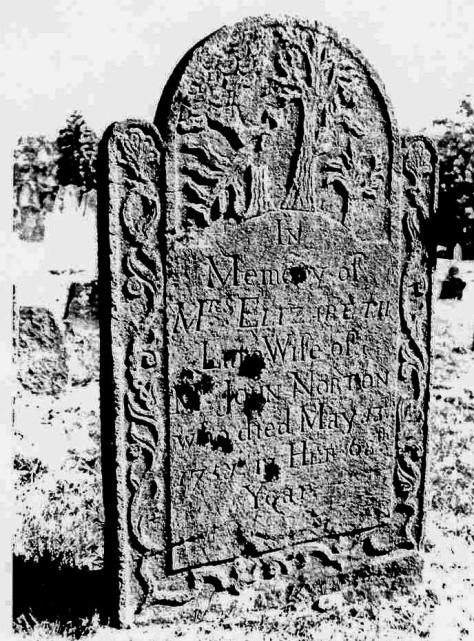 As falls a branch beneath the axes blow
So sudden fall this youth who lies below.

The image below shows an angel cutting the tree of life.

The town of St. Andrews in Fife, Scotland, takes its name from one of Christ’s apostles, and was an important religious centre in medieval Scotland from where the bishops wielded great influence over Church and State.

The ruins of the Cathedral, at one time Scotland’s largest building, originated from a priory founded by Bishop Robert in the 12th century and was a centre of learning. Scotland’s first university was established there.

The cemetery within the ruins of the cathedral is large, spacious, well maintained and manicured. There are numerous tombstones relating to the armed services and the men who were lost during the great wars.

Whose Death Was The Grief Of A Fond Mother, / And The Slighted Expectations / Of An Indulgent Father / The Youth Grew Up Like A Well Watered Plant / He Shot Deep, Rose High / And Bade Fair For Manhood.

The Royal and Ancient Golf Club of St Andrews is regarded worldwide as the ‘home of golf’, therefore it is not surprising that more than a few golfers are buried here. 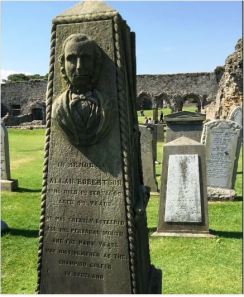 In Memory Of / Allan Robertson / Who Died 1st Sept 1859 / Aged 44 Years.
He Was Greatly Esteemed / For His Personal Worth / And For Many Years / Was Distinguished As The / Champion Golfer / Of Scotland.
Read more about this great golfer at http://www.worldgolfhalloffame.org/allen-robertson/