Wheat symbolizes the fertility of the earth, renewal, rebirth and abundance. It can also represent the long and fruitful life enjoyed by the deceased.

To Christians wheat represents the body of Christ, and is therefore symbolic of immortality and resurrection. When paired with grapes it is a symbol of the Eucharist.

It is sown in weakness
It is raised in power

Our nails are drove
Our work is done.

Till the day break

Behold the pilgrim as he lies with glory in his view,
To Heaven he lifts his longing eyes and bids the world adieu.  1886

Heaven is the abode of the sun, moon, planets and stars and is the reward of the resurrection.

Stars that pierce the darkness symbolize the spirit overcoming evil and rising to heaven. 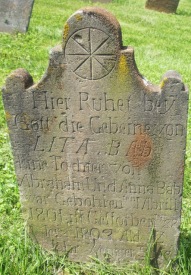 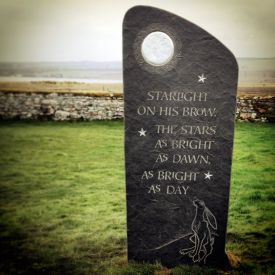 To Christians, it represents the Star of Bethlehem and is symbolic of the life of Jesus. It may also represent the five wounds of Christ.

To the Jews, it represents the five mosaic books.

This symbol has also been adopted by Masonic organizations (e.g., the Eastern Star).

A six-pointed star represents creation and divine protection as epitomized by the alchemistic signs for fire and water which are an upward and downward apex triangle. It is also called the Creator’s Star with each point representing the days of the week and the hexagram representing the Sabbath.

The interlocking triangles represent the union of opposites.

The six-pointed star or Magen David (Hebrew for Shield of David) is recognized as the emblem of international Judaism. This star comprised of an overlapping upright and an inverted triangle, is associated with David because he carried a hexagram shield against Goliath.

The sun is a symbol of light and warmth illuminating the world. Its brightness represents everlasting life. 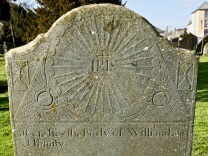 On occasion the sun is shown as a disc with wings. 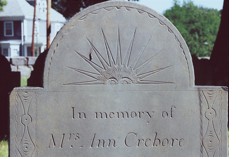 A cross crowned by the rising sun symbolizes Christ’s victory over death and is known as the Easter cross. 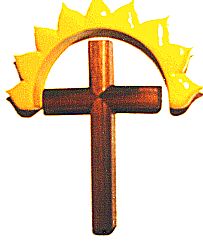 The Moon which appears in the darkness is symbolic of death; rebirth and Victory.

A crescent moon represents a virgin. 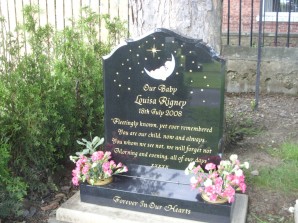 A crescent moon and star symbol denotes that the deceased was a Muslim in life.

A woman clinging to the cross is a symbol of faith. It is often accompanied by the verse Rock Of Ages Cleft For Me signifying that a person’s only hope when lost in a sea of sin is to cling to Christ’s cross. 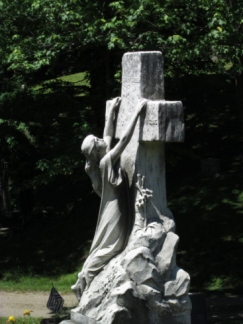 Behold the pilgrim as he lies with glory in his view,
To Heaven he lifts his longing eyes and bids the world adieu.  1886

A woman holding a cross represents faith.
Such are as faithful in love shall abide with him.

Agnus Dei is a Christian symbol representing the Lamb of God. It is one of the earliest symbols of Christ deriving from Saint John the Baptist’s exclamation on beholding Christ, “Behold the Lamb of God, which taketh away the sin of the world ” (John 1, 29).

The symbol depicts a lamb with a halo standing on the ground, holding by the right forefoot a banner flying on a wooden cross. It represents the risen Christ triumphant over death. A similar image showing the lamb with a gash in its side, symbolizes the passion of Christ.

In some instances the lamb may be seated. 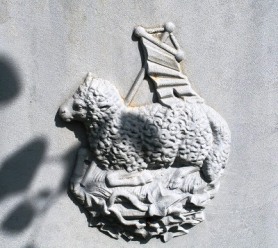 A reclining Agnus Dei seated on a book with seven seals, represents the final judgment when Christ returns in glory.

Agnus Dei was adopted as a Masonic symbol by the Knights Templar and is found on several of their seals.

The Agnus Dei is also a badge of the Queen’s Royal West Surrey Regiment. The Paschal Lamb with a halo above its head, supports over one shoulder a flag bearing the device of St. George, a red cross upon a white field. 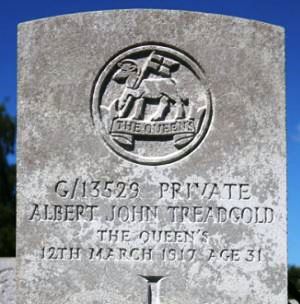