The term ‘Don’t Ask, Don’t Tell’ was initiated when President Bill Clinton signed a law regarding the service of homosexuals in the military, which directed military personnel to ‘don’t ask, don’t tell, don’t pursue, don’t harass.’

Leonard P. Matlovich was an Air Force sergeant who served three tours of duty in Vietnam and was gravely wounded. He was awarded the Bronze Star, the Purple Heart and two Air Force Commendation medals for gallantry under fire and exemplary service. Yet, despite his service, he was discharged from the U.S. Air Force after confessing his sexuality to his commanding officer. His struggle to receive an honourable discharge, rather than the general discharge advocated by the Air Force, triggered a national movement regarding gay rights especially in the military.

Knowing that he had AIDS at a time when it was a death sentence, he designed his own headstone with the idea that it would stand as a memorial for all gay veterans. 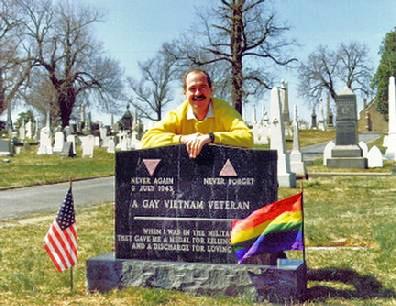 His design of a black reflective surface replicating the Vietnam War Memorial incorporated two triangles referencing the pink triangle which was a symbol sewn on the clothes of homosexuals in Nazi concentration camps. The left triangle pointing downward is a symbol of defeat. It is highlighted with the legend, ‘Never Again.’ The upward pointing triangle on the right is a symbol of victory with the phrase, ‘Never Forget.’ Although the dates of his birth and death are inscribed on the headstone, his name (Matlovich) is only inscribed at the foot of the memorial.

As an activist for Gay Rights, his words are inscribed on his headstone: ‘When I Was In The Military They Gave Me A Medal For Killing Two Men And A Discharge For Loving One.’ Although eligible to be buried in Arlington National Cemetery he chose to be interred in the Congressional Cemetery in Washington DC. “I believe we must be the same activists in our deaths that we were in our lives,” Leonard Matlovich. A gay veteran’s memorial service is held at his grave every Veteran’s Day.

Members of American Veterans for Equal Rights have purchased adjoining plots with the intention of creating an LGBT veterans memorial.

This marker for Marine Corps veteran and activist Tom Swann is located near Matlovich’s grave. Swann won a lawsuit against the Navy for discrimination against him as a civilian employee after they learned he was gay. He also led the creation of a memorial for LGBT veterans in Desert Memorial Park near Palm Springs. Never Give Up Hope Or Give In To Discrimination.

Michael William Hildebrand’s stone does not state that he is gay. However, the use of the pink triangle and the proximity to Matlovich’s grave suggests such. An inscription reads, “It Was Said Of Him That He Had The Gift To Give Love To Those Who Felt Unloved.” 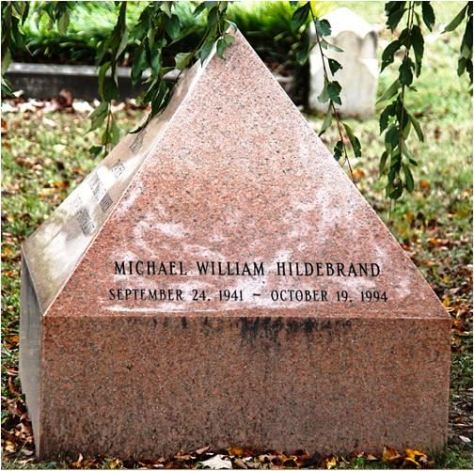