Historically, dog statues were built at the feet of medieval women, signifying the loyalty and inferior place of each in the chivalric order. They symbolized loyalty and served as guides on the journey to the afterlife.

LONDON, ENGLAND.
In Highgate Cemetery, the grave of Tom Sayers is guarded by his dog. He was a small stature, bare-knuckle boxer and the first to be declared World Heavyweight Champion. In a career lasting 11 years he was only once defeated. His retirement at age 35 was funded by the public (proof of his popularity). However, his retirement was short lived when he died 5 years later. The love of the people for this man was shown once more when they had a statue made of his loyal dog, Lion, to lay next to him for eternity.

ROCK ISLAND, ILLINOIS, USA
In 1878 special permission was given for a dog to be buried in Chippiannock Cemetery as a memorial to its dedication and loyalty. When Eddie, 5 years old, and Josie, 9 years old, died of diphtheria on the same day, October 22nd, 1878, the dog sat by the grave from dawn to dusk every day. After his death a statue of the dog was erected next to the Dimmick children’s graves. Although there is no name of the dog on the marker, it is known by cemetery employees as “Rex.” 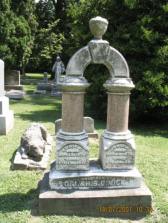 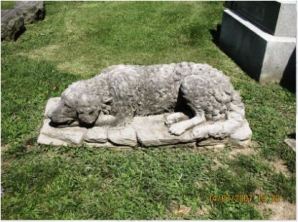 BOSTON, MA, USA
The Forrest Hills Cemetery contains the resting place of Henry Barnard 1810-1853 and his wife Lucinda Barnard 1813-1913. It is surmounted by a sandstone sculpture of a Newfoundland dog, created by Henry Dexter in 1854.

PARIS, FRANCE
The St. Bernard Hospice in Bern, Switzerland used a dog similar to the St. Bernard breed as a search and rescue dog. A dog named Barry became famous for saving more than 40 people during his lifetime.. A memorial to this dog is located in Le Cimetière des Chiens, (the Cemetery of Dogs) in the Asnières-sur-Seine suburb of Paris. A plaque on the monument states, Il sauva la vie à 40 personnes. Il fut tué par le 41ème He saved the lives of 40 people. He was killed by the 41st. There are several legends regarding the dog which have been disputed including his death. Barry was retired after a 12 year career and brought to Bern where he died at age 14. Read more on the history of this dog at this link, https://en.wikipedia.org/wiki/Barry_(dog)

GETTYSBURG, PENNSYLVANIA, USA
Sallie was the mascot of the 11th Pennsylvania Volunteer Infantry during the American Civil War. She accompanied soldiers into battle and was found protecting the dead and wounded on the first day of the Battle of Gettysburg. She was killed by a bullet 2 years later and buried where she fell. A statue of the brindle-coated pit bull lies at the base of the 11th PA infantry monument in Gettysburg. 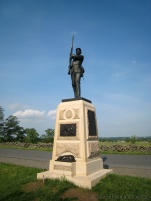 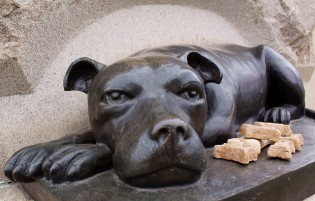 LONDON, ENGLAND.
The grave of 50 year old William French who attempted to rescue his friend’s dog is located in St Pancras & Islington Cemetery. George R. Sims from the Daily Telegraph arranged for burial of the body and the erection of a memorial. Details of the story at this link is worth a read: https://studiedmonuments.wordpress.com/2015/05/08/william-french-drowned-for-a-dog/

The inscription on the stone reads, Sacred / To The Memory Of / William French/ Aged 50, Who Lost His Life On July 13th. 1896 / While Saving A Dog From Drowning / In Highgate Ponds / This Monument / Erected In Commemoration Of / His Brave Deed / Was Raised By Public Subscription / And Was Contributed To By / All Classes Of / Lovers Of Dumb Animals

DAYTON, OHIO, USA
In 1860 when Johnny Morehouse was only 5 years old, he fell into the Miami/Erie canal. His faithful dog tried unsuccessfully to save him. After burial in Woodland Cemetery the dog would not leave the graveside and died of starvation. A stone was erected in 1861. Visitors to the cemetery have reported the ghosts of Johnny and his dog playing in the cemetery. 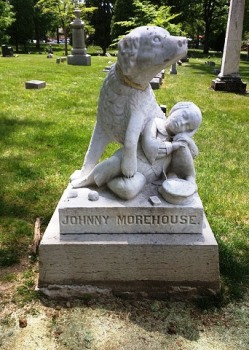 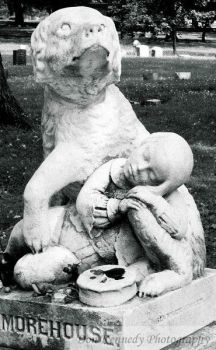