Harold Lewis Bell Lasseter became famous in 1929 with a claim that he had discovered a vast, gold-bearing reef over fourteen miles long in the Outback of Central Australia. His claim led to a search expedition which left Alice Springs on 21st July 1930.

No maps showing the location of the reef were ever found, and the tale of the reef and its discoverer has become the most famous lost mine legend in Australia, and remains a “holy grail” among Australian prospectors. His daughter claims that he found the reef (after the expedition gave up) only to discover that it was in an area considered sacred by the blacks.

ADELAIDE, Friday.—A body, believed to be that of the prospector, Lance(sic) Harold Bell Lasseter, who died while searching for a fabulous reef of gold near the Petermann Ranges in the Northern Territory in 1931,has been recovered from a grave. The find was made by the Australian Television Enterprises Ltd. unit, led by producer Lee Robinson, several days ago. A local bushman, Mr. Bob Buck, who is believed to be now in Adelaide, claimed that in 1931 he went out to search for Lasseter’s body, which had been buried in a shallow grave by aborigines. He disinterred the body, removed the upper denture and reburied the body in a proper grave with a post and railing fence and returned to Alice Springs, where a death certificate for Lasseter was issued. A native boy named Mick, acted as guide to the television party. Mick said that as a boy of 14 he was with a group of natives which led a starving white man for 40 miles towards Nindevale Station. However, he died and the natives buried him in an oval-shaped grave, doubled up in the native fashion. Mick led the party to a dry creek bed and pointed to a spot where he said Lasseter had been buried. The spot which Mick pointed out was dug up and four charred posts were found. The next day a skeleton of a man with a missing upper denture was found, a little deeper. A doctor from Alice Springs examined the skeleton at the grave and declared it to be that of a white man about 5ft. 4in. tall and of similar build to Lasseter.
Canberra Times (ACT), 21 December 1957.

The date of his death was established as January 30th 1931. His grave was located on December 14th 1957 by an expedition led by Lowell Thomas and Lee Robinson. Lasseter’s daughter stated that ‘…he died alone of dysentery and sandy blight in a lonely cave in the Peterman Ranges. The blacks came and put his body in a tree wrapped in bark as they do with their own for a certain period.’ A memorial is located in Pioneer Cemetery, Alice Springs, NT. 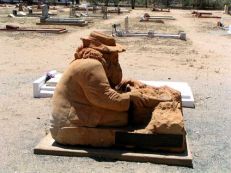