Chinese cemeteries are usually located on a hillside according to Feng Shui practice.

Statues found at the gates of Chinese cemeteries or guarding a grave, are Guardians of Buddah. They are known by many names: Imperial Guardian Lion, Shih Tzu of Fo, Lion dogs or Foo Dogs and are displayed in pairs. The male, sitting on the right rests his paw on an embroidered ball, which signifies the authority of man in the world and is represented as Yang. Yin is manifested to the left in the female who restrains a kitten. She represents the nurture of offspring.

In the past, many gravestones in China were in the form of an armchair which represents authority and wealth. Expense, management of land and promotion of cremation by the government has made this form of gravestone less common.

The National Environmental Agency has an exhumation policy which limits the number of years a body can lay in the grave. After 15 years bodies are exhumed to make way for new burials. Bodies not claimed before exhumation are destroyed.

A Chinese gravestone usually has at least three columns of characters. The size of the writing indicates the relative importance of the information. The writing in the middle column showing the name of the deceased tends to be larger than that on the side columns. Most gravestones have the family name first followed by given names. Information relating the date and place of birth and age of the deceased is inscribed on the right hand side (east) and the date and time of death is found on the left (west). 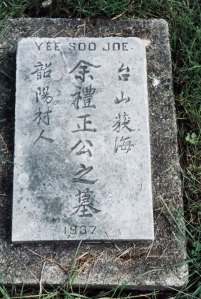 Qingming Festival in Singapore is also known as Grave Sweeping day. Chinese families honor the dead by cleaning family graves and burn offerings to appease the dead in the afterlife.