This memorial located in Victoria Lawn Cemetery, St. Catherines, Ontario, Canada is in remembrance of three young children. They are the offspring of Joseph & Mary Shickluna and grandchildren of the celebrated Louis Shickluna.

Weep not for me, dear parents dear.
I am not dead but sleeping here.
My glass is run; My age you see.
Wait but awhile and follow me.

The patriarch of the Shickluna family in Canada was Louis Shickluna who was born in Malta in 1808 into a family of shipbuilders. He emigrated to North America disembarking in Quebec and moving to the United States where he was employed as a ship construction worker in Youngstown, New York State. In 1835 he visited his family in Malta, probably to claim his inheritance from his wealthy parents. In 1838 he moved to Ontario, Canada to pursue opportunities with the recently completed Welland Canal at St. Catharines and became one the city’s most notable citizens with a reputation of being a skilled shipbuilder, constructing over 140 vessels including snub-nosed schooners designed to make maximum use of the canal locks, barkentines, steamers and other vessels designed primarily for service on the Great Lakes. He is recognized in Canada’s Maritime History and his story is detailed in a plaque unveiled on November 29, 1979 on Yates Street, St. Catharines, Ontario. 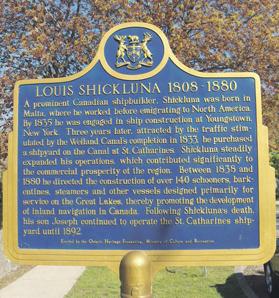 A prominent Canadian shipbuilder, Shickluna was born in Malta, where he worked before emigrating to North America disembarking in Quebec. By 1835 he was engaged in ship construction at Youngstown, New York. Three years later, attracted by the traffic stimulated by the Welland Canal’s completion in 1833, he purchased a shipyard on the Canal at St. Catharines. Shickluna steadily expanded his operations, which contributed significantly to the commercial prosperity of the region. Between 1838 and 1880 he directed the construction of over 140 schooners, barkentines, steamers and other vessels designed primarily for service on the Great Lakes, thereby promoting the development of inland navigation in Canada. Following Shickluna’s death, his son, Joseph continued to operate the St. Catharines shipyard until 1892.

Due to failing health and rheumatoid arthritis he left the shipyard to his sons. Following his death in 1880, (he is buried in Victoria Lawn Cemetery, situated beside Welland Canal in east St. Catharines) his son, Joseph, continued to operate the St. Catharines shipyard until 1892.