There are many memorials around the world commemorating those killed by Hitler and his Nazi party during the Holocaust (Holocaust is a word of Greek origin meaning sacrifice by fire.) Most of these memorials recognize mass graves or those killed en masse.

The following gravestones identify individual families who were killed at the whim of a madman during an era in human history which is shameful and abhorrent.

Memorial to the Stroch family.

Early on the morning of March 9, 1942, the transportation of Mielec’s Jews commenced. That morning, all the remaining Jews were marched at gun point out to the aircraft hangers at Cyranka. The elderly, sick and certain prominent people in the community, including the rabbi, were shot. For the next three days, while Mielec’s Jews were deported by train, those remaining at Cyranka were marched around the compound. Any that appeared weak, sick or injured were shot. Those killed during the transportation were buried in a mass grave near the aircraft factory. (from Mielec Through The Holocaust by Howard Recht).

For My Dikerman family
Exterminated in Auschwitz-Birkenau
Moise aged 53, maria aged 52, Abel aged 30 and Regine aged 29
Note: Prisoners being held at Auschwitz were used to build the Birkenau camp crematoriums. In 1942, Auschwitz-Birkenau was a killing center.

Remembering the Kallos family
In Auschwitz 28 May 1944
He was martyred for being a Jew
Kallos Dezsone
Parent Szalpeter Roza 1884
Kallos Jolan 1909
Her husband Lebovits Bela
Kallos Jeno 1911
Kallos Helen 1913
They have memories to be remembered
Note: In November 1944 the gas chambers were being dismantled.

Germany and Europe
In 1993 German artist Gunter Demnig had a simple and effective idea to honour those who were persecuted and murdered during the Holocaust. After locating the former residence of a Nazi victim, and with permission of local authorities, he installed a small commemorative cobblestone topped with a brass plaque in front of the residence. The title of each plaque Hier wohnte (Here lived) records the individual’s name, date of birth and death, and fate. The premise is ‘One victim, one stone’. The project which began in Germany can now be found throughout Europe.
A few fateful words which are found on the brass plaques. 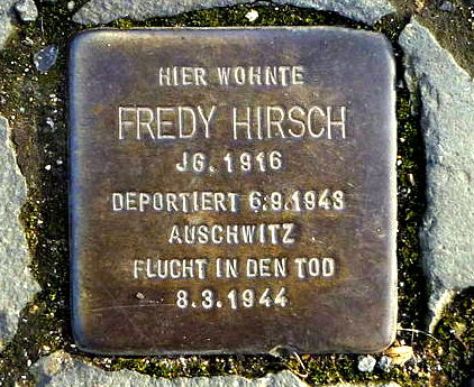 Here Lived
Fredy Hirsch
Circa 1919
Deported 6.9.1943
Auschwitz
Flight into death (this phrase is used in cases of suicide)
8.3.1944
Note: Auschwitz was located in South Western Poland

Here lived
Ida
Arsenberg
Maiden name Benjamin
Circa 1870
Deported 1942
Murdered
On the 18.9.1942 in
Theresienstadt
Note: Theresienstadt was a Czechoslovakian camp/ghetto.

Anyone who did not fit Hitler’s model of the perfect Aryan race was routinely arrested, tortured, and eradicated. Those at risk were:

Grant them Peace o Lord. MAY WE NEVER FORGET.