Paul G. Lind (legal name Ebbighausen) died 29 March 2005 and is commemorated with a Scrabble board in Lone Fir Pioneer Cemetery, Portland, Oregon. A fanatical Scrabble player, this game contains two blank tiles: the “b” in football, and the 2nd “l” in loveable.

The gravestone for Penney is inscribed with the American sign language symbol for ‘I love you’. Pennies are frequently left atop the gravestone. 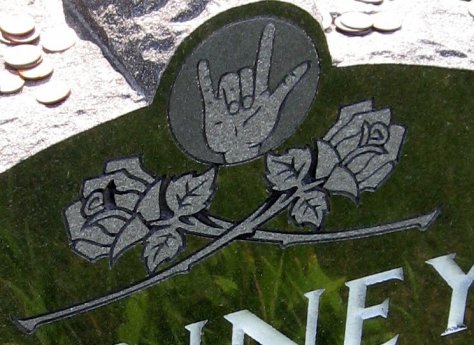 Resembles walking into the sea.

From my rotting body, flowers shall grow and I am in them and that is eternity. ~Edvard Munch

This sculpture could be related to an old tradition of attaching a bell to the wrist of the dead to prevent people from being buried whilst still alive. A string was tied on the wrist of the corpse which was attached to a bell above ground while a sentry sat in the cemetery overnight.

Gravestone memorializing the owner of the clothespin factory in Montpelier, Vermont. 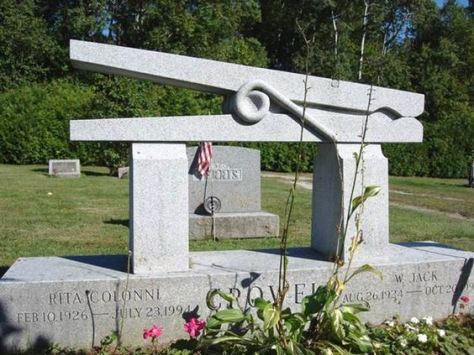 Statistically women live longer than men, and that may be the reason why we see so many statues of women weeping at the graveside. As expected, the pose is symbolic of mourning, loneliness and sorrow. 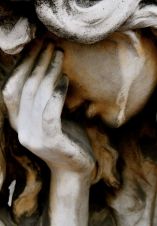 The posture of a weeping woman also recalls the Greek myth of Niobe who wept endlessly for her 14 children slain in revenge for an insult. When she pleaded with the Gods to end her pain they turned her to stone.

The friend who can be silent with us in a moment of despair or confusion, who can stay with us in an hour of grief and bereavement, who can tolerate not knowing… not healing, not curing… that is a friend who cares. Henri Nouwen – 1932 – 1996 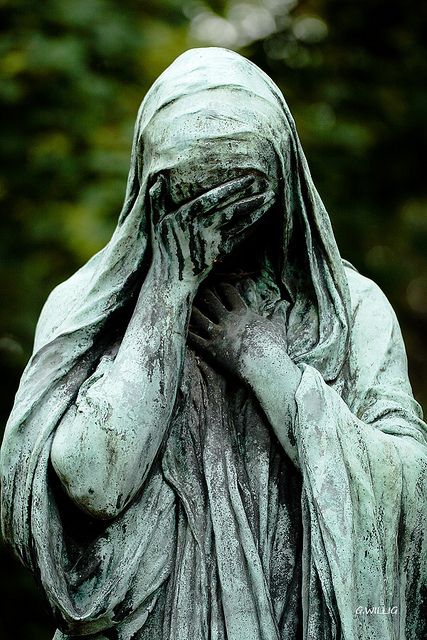 The fairest flower that nature shews,
Sustains the sharpest doom,
His life was like a morning rose
That withers in its bloom.
Weep not mother for John is at rest
His sins forgot and in Heaven blest.

My time is short: the longer my rest
God called me heare because he thought it best
So weep not; drie up your tears
Heare must i lie till Christ Apears. 1802

Weep not for me I go to my Father where I will meet you all again. 1877

Father thou art gone to rest
We will not weep for thee
For thou are now where oft on earth
Thy spirit longed to be.- 1888 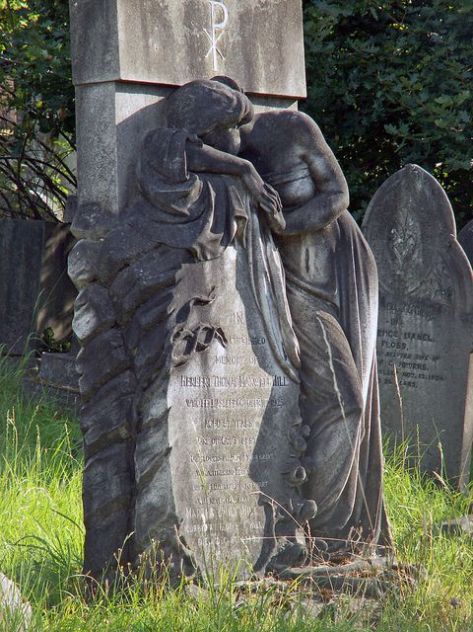 In the late 17th century two sisters, Margaret and Agnes Wilson from Wigtown, were arrested for refusing to renounce the Covenanter faith which was in opposition to Royal control over the church. A plea from their father released Agnes; however, Margaret aged 18 refused to swear an oath declaring James VII as head of the church. She was chained to a stake in the tides of the Solway Firth and drowned on 11th May 1685.

A glass tomb memorial commissioned by William Drummond in 1859 was designed by Handyside Ritchie and cast by George Smith & Co. Sun Foundry Glasgow. The cupola which was added in 1867 is capped with a crown resting on a pillow. The tomb contains marble statuary of the sisters and an angel. Margaret, with a look of determination on her face, is seated with a bible in her left hand. Agnes, the younger sister is leaning against her as she looks down at the bible. An angel holding a wreath overlooks the pair, and a lamb is seated at their feet (a symbol of martyrdom).

An engraved plaque is located on the stone pedestal.
Margaret / Virgin Martyr Of The Ocean Wave / With Her Like-Minded Sister / Agnes.
Love, Many Waters Cannot Quench God Saves / His Chaste Impearled One In Covenant True / O Scotia’s Daughter Earnest Scan The Page / And Prize This Flower Of Grace Blood-Bought For You.
Psalm IX:XIX

There are four symbols above the legend: the letters nr, a Sun Cross, the Greek letter Omega, and waves or water.

The octagonal stone base has several engravings.
Revelation 22:13-21 is engraved on the stone at the front of the pedestal and is a reference to Christ as “the First and the Last.”
A second biblical reference is Isaiah 17:12-14 which refers to the roar of the seas and mighty waters.
A third panel is engraved with the words Glory To God

Individual glass panes beneath the cupola display the words, It Is / Christ / In Us / Lord / Jesus / King / Judge / Saviour